1)Let’s review shall we, the case of the GIGANTIC BUS that ran the majority of farmers over last week: 2% of the U.S. population is engaged in the work of producing the food that feeds their neighbours (and to some extent, the world). You would think with so few in the business the powers that be would not have to resort to fear mongering in order to sell their products. Alas, that is not the case. Of course we expect that sort of sh*t from peddlers and salespeople like The Food Babe (yeah…I ain’t gonna link to her page here. You want to read her crap and sales pitch you go right ahead or you can just trust me when I say that if someone is going to resort to talking about beaver butt * then maybe, just maybe they are more interested in shocking then they are in providing information). So, to recap-we expect crap and fear mongering from slick salespeople like the Food Babe (and Panera and Chipotle). We do NOT expect the same sort of fear based sales pitch throwing farmers and ranchers under the marketing bus from other farmers. In the fine tradition of Oakhurst labeling its milk and dairy products “rBST Free” thereby inciting the idea that there was something inherently “wrong” with rBST and its use to garner a higher profit many bottlers have followed suit, promoting their products not on its merits or what they offer, but on the implied and supposed “threat” of what the competition may offer. Even the Washington Dairy Products Commission is now promoting milk and dairy products from Washington state farmers as rBST free because, “Regardless of how you feel about rbST, Washington residents can drink a little easier knowing that Washington milk is rbST-free.” So, not that there’s anything WRONG with all the other milk, but you can certainly rest easy knowing that there might be and you can avoid it by buying our stuff. (That wasn’t a speed bump-the bus just ran over a bunch of dairy farmers). As if all this wasn’t bad enough Only Organic recently released a commercial that basically takes the cake (a gluten free, non-GMO, Organic, and non-radioactive cake) with regards to fear mongering, surpassing past efforts by Panera and Chipotle (extra points were awarded to Only Organic for their use of children and the fact that Only Organic actually represents farmers and their hard work so yeah, I tossed in extra points for the cannibalism.)

The thing is, most of us farmers didn’t even hear this bus trucking like a bat out of hell before it hit us.

But the upside? The Upside is that Organic Valley listened to farmers who expressed their sorrow, dismay and disappointment in the video. Listened well enough to remove it from their Facebook page. Bravo Organic Valley, and thank you. It would be nice if all farmers stuck to farming and the folks selling stuck to selling and everybody left the bus driving to those who are duly qualified, or at the very least, the ones who avoid pedestrians.

Now, that we are all caught up, let’s catch our breath and summarize: Only Organic and its partners have decided that in order to secure the market share and achieve the profit margin they long for figured that a slick video that twists realities, preaches fairly unreasonable (well, actually REALLY unreasonable) myths, suborns fear, and hits all the emotional buttons possible with the “playful” use of kids. Basically, they have upgraded from your standard bus to driving the biggest ass bus available and are not just running over farmers willy-nilly who happen to be in the way-they are literally gunning us farmers down. (and they really are getting paid to do it). In order to publicize and promote their little ad-venture they are hosting a Twitter party March 11th starting at 6pm EST with the hashtag “#NewMacDonald” . “What’s a Twitter party?” you ask….it’s like a Junior High Dance where you don’t have to get dressed up (I am CERTAIN there are nekkid Twitter-partiers out there). The whole thing is being hosted (READ: TRULY SHILLING FOR THE MAN) by a Ms. Leah Segedie, of whom I know very little because 1) I am fairly ignorant of many, many people who seem to be very, very popular and I very rarely run in their circles 2) I generally avoid people who seem hell bent on selling shit at the expense of facts and 3)After making two teeny-weeny remarks on Twitter I got blocked by the most popular girl going to the Twitter party (Leah Segedie @bookieboo) .(see, I told you it was like a Junior High Dance)

Basically I am really a nice person so if I had known I was gonna get blocked I would have used my potty-mouth. I mean I am pretty tame, and I have a reach and engagement of about, oh, let’s say 7 people (including apparently someone in Oman) so in this instance blocking me says WAY more about them than it does about me. As far as I am concerned I spoke the truth and did so in less than 140 characters. I am usually all about the truth but the brevity is always a reach.

So if you are hanging out looking for something to do on Wednesday, March 11th, at 6pm EST Twitter is where it is at because some of us farmers are going to be very busy talking about how we steward our land and animals with care, attention, responsibility and an eye to the future and with homage to our past because we are not just raising crops and animals, we are raising the next generation.

2)How about some GOOD NEWS? The FDA recently released its milk sampling survey, involving the testing of nearly 2,000 dairy farms (BOTH ORGANIC AND TRADITIONAL). The results? Statistically speaking the presence of antibiotic residues in America’s dairy is non-existence. Even when you get down to the nitty gritty we are talking about .4% revealing presence of residue, which as my daughter says is due “an asterisk” in the findings.. For more information about the survey you can read a Veterinarian’s perspective here and you can read the report in its entirety here. More importantly, you can always ask a farmer. As a matter of fact fellow dairy farmer Mary Mackinson Faber from Mackinson Dairy does a great job explaining some of the efforts that go into keeping our animals healthy and providing some of the finest, safest and highest quality milk to our neighbours, and the world in this post.
It should also be noted that presence of antibiotic residue in milk at the farm (as found in the survey) does not automatically indicate a purposeful or pre-meditated misuse of medications. The reasons behind those findings can be anything from human error, clerical error or administrative error. More importantly, because of the fact that there are errors that can be made on farm, samples from each load of milk are taken on farm as well as from the entire load upon delivery at the bottler/processor and tested prior to the milk being unloaded. Should there be an incidence of antibiotic residue the load is not accepted or used (it is condemned) and the offending milk is traced using the samples. America has one of the world’s safest and highest quality dairy supplies. It is unfortunate that NPR’s Dan Charles and Time failed to report out the facts and chose to beat the bushes for boogeymen instead. 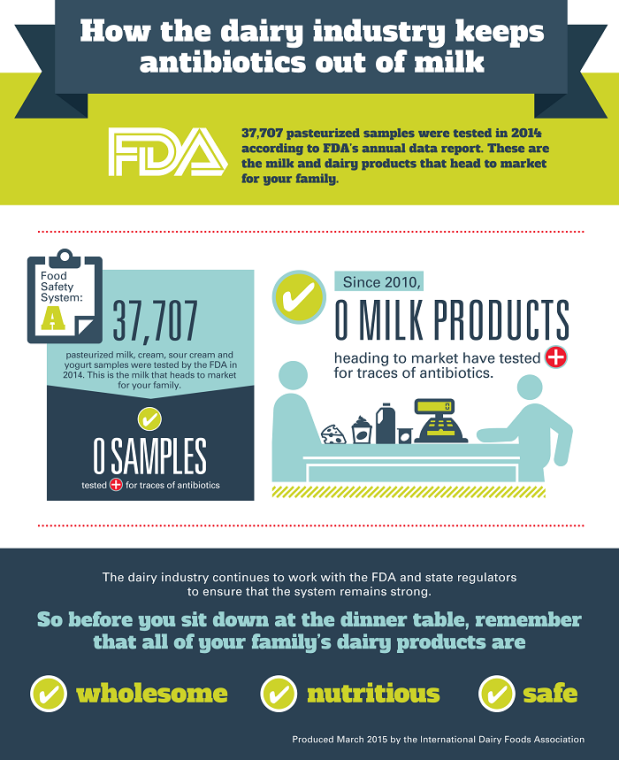 There is no doubt that America’s dairy supply is among the safest and highest quality in the world. And not just because this farmer tells you, but because the numbers, they don’t lie. In 2014, the FDA tested more than 35,000 samples of milk, cream, yogurt and other dairy foods and found that none of them tested positive for traces of antibiotics. In fact, zero milk products have tested positive for traces of antibiotics since 2010. But never hesitate to ask a farmer.

3) It’s undeniable. Mercer is perhaps the sheep I like most. If you are not following Jami Badershall and her blog Good Tidings from Good Tyddyn then you should. Jami is not only a beautiful writer but she leads life most extraordinary and, did I mention Mercer?

The Unbearable Cuteness of Mercer…dude, this sheep is ALWAYS blissed out.

*I am blaming it all on DST, which apparently I can now blame on the Germans